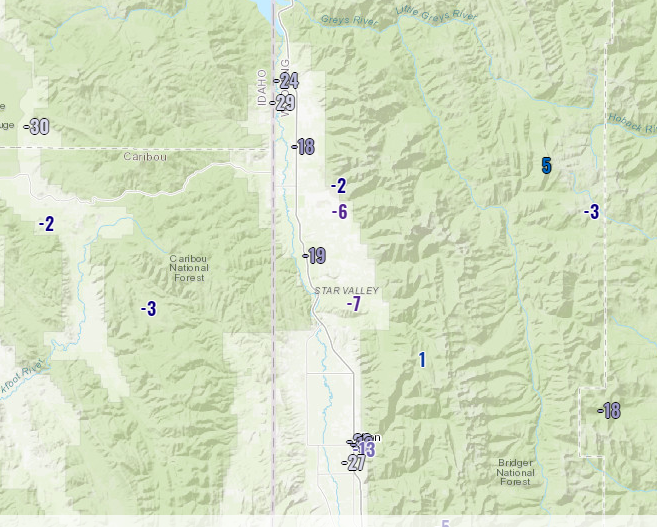 Temperatures plummeted to levels not seen in over 3 years throughout Star Valley this morning. In the valley floor readings were generally 20 below on down.  The coldest observed was around -30 at Double L  Ranch northwest of Etna.  Unofficial readings down to -35 were reported in the Ice Box of the Valley at Auburn.  It has not been this cold in the valley since January 6 2017.

Following figure are temperatures of 20 below and lower throughout the region.  Again if these were not cold enough for you then the -44 below at Peters Sink in northern Utah ought to fill the bill.

The map of all the observed minimums  dramatically illustrated  the very strong temperature inversion and the actually warmer air moving into the area above. The  warmest temperatures were on the mountains top level as can be noted at Deadman’s Peak at over 10,000 feet with 5 above zero, some 30 degrees higher than along the Salt River some 5000 feet lower elevation, Even the Banana Belt of Star Valley Ranch dipped a few degrees below zero, but still 20 degrees higher than a couple miles away!