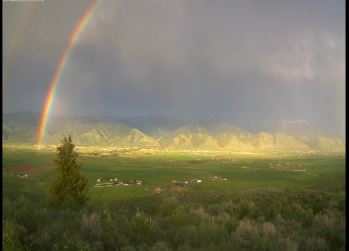 a severe thunderstorm that originated over Northern Utah Saturday afternoon moved rapidly northeastward across particularly the upper portion of Star Valley during the evening.  Following reports were received:

A storm system that blew through Star Valley caused wind damage to homes, downed power poles, sparked a couple fires, and caused a lot of tree branch debris this evening. Various reports have come from Osmond, Fairview, Afton, Grover, and Thayne. Lower Valley Energy has been working diligently to restore power to areas affected by outages.

Two of the  valley weather cams captured the storm  as it raced across  Star Valley around 8pm.  The first video from the Cam in the West Hills looking east toward Afton  showed the dust that accompanied the 60 mph measured winds at the Afton airport followed up by a rainbow.

The second view was from the southward looking cam at Star Valley Ranch showing the dust being raised by the strong winds.