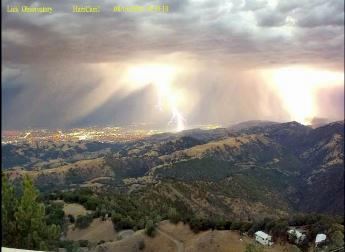 Unusually active thunderstorms moved across the California Coastal area Sunday morning August 16 2020.  The web camera site for Starvalleyweather.com actively monitors and archives around 120 cams mostly in the area of Wyoming. However there are cams on the site including one at The Lick Observatory east of San Jose, California on Mt. Hamilton.  The cam caught what appears the lightning strike which ignited the Marsh Fire as noted above.

Smoke plumes associated with the morning lightning strikes can be seen growing during the heat of the day.

The GOES Satellite also caught the storms  that resulted in the unusual thunderstorm activity.  The Satellite in addition to the visible imagery has a lightning sensor which on the following video shows the areas of lightning strikes during the morning.