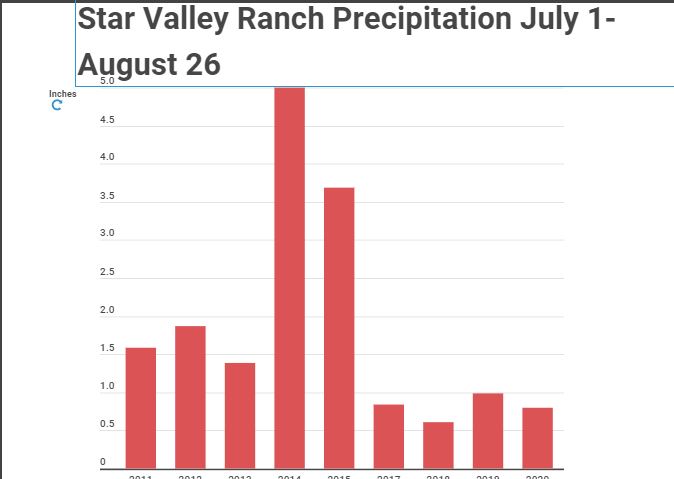 It has been another summer when little significant precipitation at Star Valley Ranch.  The most notable weather event for the summer thus far has been the considerable smoke that covered much of the area for several days originating  from the extensive fires in California.  As of August 27th conditions have improved.

Due to deadline constraints this blog will cover the period from July 1-August 26th to compare  this year with the past 9 years. The observations are taken in Star Valley Ranch on Vista Drive  near the NF border.

It has been the fourth dry summer after a couple wet ones in 2015-2016.  The average for the period is around 2 inches about double the observed amount of the past 4 summers.  The lack of Monsoon moisture making it this far north is the primary reason for the limited thunderstorms in our area.

The official climate station in the area is located 3 SE of Bedford where the comparison of normal with this summers precipitation total is compared.

With the absence of cooling showers, particularly in the month of August , daytime temperatures have been warm with several daytime record highs set at the Bedford 3 SE station.

Most all of Wyoming has had a dry summer .