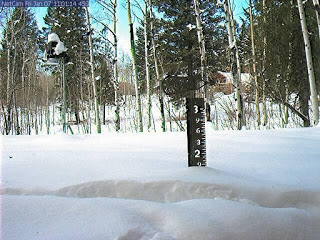 Above are images of the Star Valley Snow stake taken a year apart. The weather station noted in the background of the 2011 photo was relocated to the roof of the Town of Star Valley Public Works Garage in August 2011 and can be seen at this link http://www.weatherlink.com/user/svrtown/.

Additionally the camera used in last year’s image was located in the downstairs window of our home on the Ranch.  It also was moved in August 2011 and now has an excellent view of the valley from the top floor of the Public Works Building.  A current image from this camera can be seen at this link
http://216.128.229.102:443/image.jpg

The camera now viewing the snow stake is not quite the quality of the Stardot Camera that was moved to the Public Works Building but still provides a good view of the snow stake.

There was about a foot more snow on the ground in 2011(about double) than currently being observed, as can been seen from the images.

Looking ahead to snow possibilities there is good news and bad news.  For those who rely on snow for winter sports it is bad news as the jet stream pattern remains unfavorable for any significant snowfall for the foreseeable future.  For those who have enjoyed predominantly sunny, dry days it is good news. There should be several in the next week or so.

The key here is the term “foreseeable future”.  The computer models have continued to improve over the years but beyond a week still generally show limited skill when forecasting, particularly when it comes to precipitation.

One method of displaying forecast data is using meteographs.  This particular meteograph was based on the computer model run from Friday morning, Jan 6 2012, for the next 180 hours or about 7 days and computed for Soda Springs, ID which is in fairly close proximity to Star Valley.  Of particular interest is the lack of any precipitation being forecast for the next 7 days with only .01 for next Wednesday.  Also, the temperature graph indicates no real cold weather which certainly can occur in mid January.