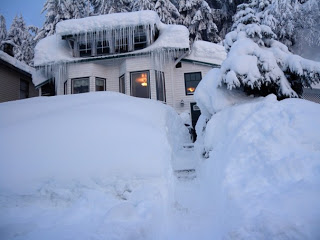 The first 10 days of 2012 have been virtually snow free across Star Valley. Such is not the case in the towns of Valdez and Cordova Alaska, which have been buried under 10-15 feet of snow so far this winter

There is an upper trough of low pressure that will be passing by mostly to the northeast of Star Valley tonight. This mornings 500 mb analysis locates the trough just moving southeastward toward the Northern Rockies.

By Wednesday evening this trough will deepen over the Plains and bring considerably colder air south into Star Valley.

While some light snow could move across Star Valley later this afternoon and evening, no accumulation of concern is expected.  As cold high pressure moves out of Canada in the wake of the trough, skies will clear on Wednesday leading to a very cold night.  Temperatures Thursday morning could be the coldest experienced thus far this winter.  With clear skies and calm winds, coldest valley locations such as Auburn /Grover and possibly Thayne could drop to 15-20 below zero.  Typically warmer locations, such as higher elevations of Star Valley Ranch, may not drop much, if any, below zero.

High pressure will cover much of the Intermountain West through the coming weekend. As has been the case much of the winter, strong valley inversions will develop and limit the amount of daytime warming, keeping temperatures well below freezing and nights below zero.

However, there are now signs that a pattern change is going to take place next week bringing an end to the snow drought.  The jet stream and storm track will be shifting southward into the western states. The longer range models are still inconsistent on forecasting this change, but they do suggest that warmer air at least could begin to reach the valley floor raising daytime temperatures to above freezing by the first of the week.