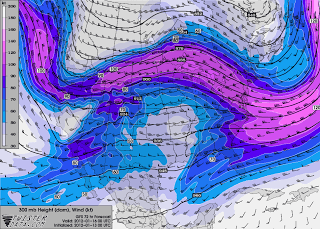 Confidence has increased in  the numerical models forecast of a major jet stream pattern change.  High pressure currently dominating the Star Valley region will weaken over the coming weekend.  This will allow a strong Pacific jet stream and storm track to enter the Western U.S. Initially this will lead to a gradual modification of the cold air mass currently across the area along with increasing cloud cover over the coming weekend.

The first in what appears to be a series of strong upper troughs will spread snow across the region by late Sunday into Monday.

The moisture available with this system is expected to be somewhat limited, thus snow amounts should not be excessive.  At this time a few inches in Star Valley are possible with higher elevations somewhat greater by Monday morning.

However the jet stream continues to stream eastward from the Pacific Ocean across the Star Valley region bringing increasing amounts of moisture inland.

Precipitable water amounts are forecast to increase dramatically by that time along and off the Pacific coast with resultant threat of significant snows developing, particularly  in the mountains.

Systems will be moving rapidly with the strong jet stream, precluding any skill in timing the greatest threat of snowfall.  However with the storm track/jet stream remaining across the region into the following weekend it would be expected that substantial amounts of precipitation, likely snow will occur over the next 7-10 days.

The models rather rough guess at the total amount of precipitation to fall over the next ten days,

up to 2 inches along the western Wyoming border, including Star Valley. Thus snowfalls upwards of  one of more feet would be possible in the valley and considerably more in the mountains north and east of Star Valley.  This assumes the models have a reasonable handle on the developments and that much of the valley precipitation will be snow  It will be a mild flow of air off the Pacific similar to the end of December, which could result in at least some rain in the valley and less snow.