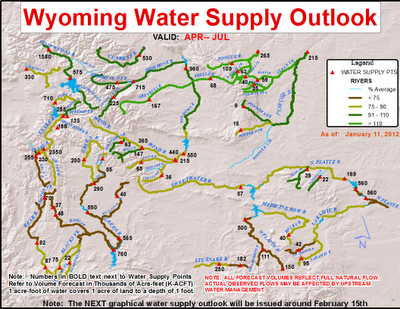 The first Water Supply Forecast for 2012 based on the current below normal snow pack has been issued by the Riverton Forecast Office.

The Salt, Greys and Snake Rivers are all forecast to be below normal based on the current snow pack. Currently snow packs are running just a little above 50 percent of normal.

However, a major change in the jet stream pattern, that has maintained the dry and cold pattern, is expected to provide a significant boost to the snow pack and potential water supply for the remainder of January.

Several fast moving systems will be tracking across Star Valley beginning tonight.  This first system will primarily be ushering in a cold air mass dropping temperatures 20-30 degrees from this afternoons highs in the 40s to teens on Monday.  Gusty winds and snow will whip through Star Valley later tonight and  Monday morning. However, limited moisture should preclude more than an inch or two in the valley with several inches in the nearby mountains.

After a brief respite Tuesday, the next of several fast moving disturbances will move from the Pacific Ocean across Star Valley accompanied by a very moist air mass and strong westerly winds.

While timing of  disturbances that will be embedded within the strong polar jet, the moist westerlies will be established by Wednesday, leading to an extended period of snow.  Temperatures will gradually warm with precipitation possibly turning to rain by the end of the week in lower elevations.

The models are forecasting large amounts of precipitation.

Snow totals in the mountains are likely to be measured in feet, ranging upward to 2-3 feet, with the greatest in the Tetons and substantial totals even in the mountains surrounding Star Valley. The valley floor should easily receive upwards of a foot and possibly even more if precipitation remains all snow.