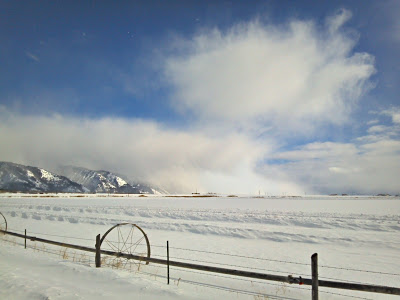 The storm track remains across Star Valley and will provide at least 2 significant snow events this coming week.  Sunday was a day in which cold air aloft, with a departing trough, brought snow showers  across the valley.  A photo taken from just west of Star Valley Ranch Sunday afternoon looking southeast, captured a typical  scene,  a low topped convective snow shower that was moving eastward from the Bedford area.

The water vapor satellite imagery from noon Monday shows the two systems that will be affecting Star Valley this week.

A large area of cloudiness is already spreading northeastward from the system located over California this Monday morning.  Today’s 500 mb analysis shows both the trough over California and probably the bigger snow producer of the two  troughs, moving through the Gulf Of Alaska.

By Tuesday morning the California trough will be heading eastward across the intermountain region with the next stronger system approaching the Pacific Northwest.

Snow will spread and increase across Star Valley Monday night and continue well into Tuesday as the upper trough passes by to the east.  With the stronger upward motion in the trough remaining just to the south, snow amounts are not expected to be large.  The model forecast precipitation for the 24 hours ending Tuesday morning suggest from 2-4 inches in the valley.

The higher snowfall totals should be just to the south.

There will be a brief lull in the snow by later Tuesday,  however, the Gulf of Alaska system will quickly begin affecting the area by Wednesday, with likely a longer duration of snow.

The forecast 500mb conditions for Thursday morning display a strong westerly flow of cold  and moist air across western Wyoming which will lead to significant snowfall totals, particularly in the mountains.

The model forecast precipitation for the 48 hour period from Wednesday morning to Friday morning suggest snowfall totals of 1-2 feet in the mountains including the Tetons and Salt Ranges.  Unlike last weeks storm, it will remain all snow in Star Valley,  with totals possibly ranging upwards from 6 inches to a foot.

While a way off yet, the models paint  a much improved weather picture this coming weekend as an upper ridge moves into the western states.