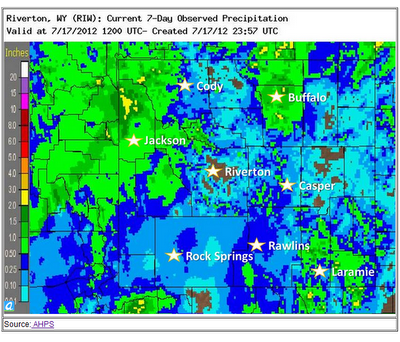 Now that the latest surge of Monsoon moisture has departed Western Wyoming  Riverton WFO has produced a rainfall summary of the past week.

Star Valley received anywhere from a half inch to an inch and a half in several periods of showers.  It provided substantial relief from what has been a very warm and dry summer thus far.

The air mass has dried out again but it appears that monsoonal moisture could make another visit to the area by this weekend.  The upper air pattern continues to be dominated by a large high pressure over the central states where they are suffering under drought conditions and near record heat.

Over the next couple of days the upper high becomes even stronger while the persistent low now near the northern California coast moves northeastward into Canada.

This pattern assures that Star Valley will stay warm and the only question is will we be favored with showers and thunderstorms from a return on the monsoon moisture.

This mornings infrared and water vapor satellite imagery suggest that may already be taking place.

While high clouds will begin increasing Thursday afternoon over Star Valley, chances of thunderstorms will likely not appear until Friday.  Initially storms that develop will contain only small amounts of rain, but gusty winds will be likely as the afternoon temperatures will be very warm.

Over the weekend with moisture continuing to increase, the chances of more substantial showers will be possible.  However temperatures will continue very warm in the afternoon with highs near 90 F in the Valley.