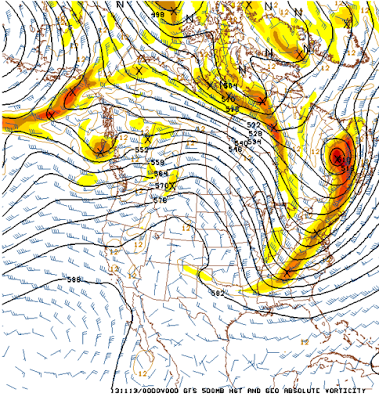 The beautiful weather that has been been dominating Star Valley and Western Wyoming the past several days will be coming to an end. The coldest air mass of the Fall will be pouring south out of western Canada by the end of the week. The ridge of high pressure that was centered over Wyoming Tuesday will rapidly weaken  with a high pressure ridge building northward off the west coast.

The system that will bring the coldest air is just entering Alaska  from Eastern Siberia. It will be  preceded by a couple weaker impulses that will cross the western states the next couple of days.
While clouds will be prevalent, the initally dry air mass will limit the snow potential until the stronger system arrives by weeks end.
Following are a series of 500mb forecast charts depicting the transition of the large scale pattern for the rest of the week.
This model brings clouds and gradually colder daytime temperatures through the remainder of the work week.  Some snow will be possible by Thursday and Friday with the passage of the upper systems. Then more serious snow potential and much colder air will arrive over the weekend  Too early to forecast the amount of snow as the system that will be the primary source has yet to even  enter Alaska as of Tuesday  evening. However temperatures will remain well below freezing over the weekend with potentially nighttime readings dropping to single digits Sunday night.