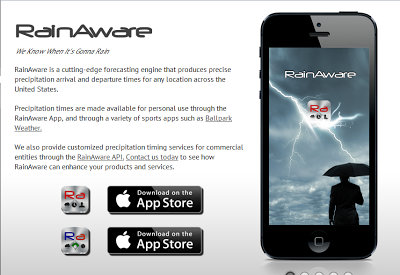 This blog post  is not a paid commercial but a personal endorsement for what in my opinion, is a significant step forward in providing high resolution forecasting for occurrence of precipitation at any location in the United States.

Recently an Android version has been released  as well 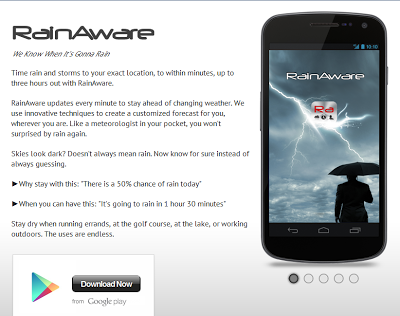 This product should be of considerable use to Star Valley residents.  It will provide quality precipitation timing forecasts helpful on decision making of  farmers, ranchers, construction companies, outdoorsman, travelers, sporting events,  etc.
Following is a description of how RainAware  produces the high resolution precipitation forecasts.
Determining when precipitation will occur at a user’s location is a very complex process. Our team evaluated many different methods and realized that none of the existing forecasting methods provided the forecast quality and reliability we needed. So, we developed a completely new method that is the cornerstone of the RainAware system.
It is so difficult to predict precipitation times at any given point, that very few meteorologists even attempt it. Those that do use a method called “linear extrapolation”. Basically, a storm motion is determined from environmental data, and is used to move radar echoes forward in time. A computer then examines the future positions of the echoes, and determines when the echoes will hit the location in question.
But “linear extrapolation” makes two huge assumptions. One, that the radar echoes will move in a straight line, and two, that they will not change shape or intensity before arrival. Both of these assumptions result in poor performance. Unfortunately, nobody can predict these subtleties until they occur.
Our method understands that weather is extremely complex and changes by the minute. RainAware doesn’t fall prey to either of these assumptions. Instead, complex mathematical methods are used to examine literally thousands of possible storm motions, with a different probability of occurrence for each one. In a fraction of a second, RainAware has developed a massive ensemble of outcomes for every 5 minutes out to 3-hours.
The end result is much more than just a “forecast rain time.” RainAware’s scheme results in a high-resolution table of precipitation probabilities, intensities, and types.
The user can then decide at what confidence level they would like to be alerted for precipitation. This provides ultimate control to all types of users, whose needs may vary.
So while RainAware provides an accurate and simple “answer” in the form of precipitation times, as you can see there is much more going on behind the scenes. These differences clearly set RainAware apart from any weather forecast available today
This program has been developed by experienced meteorologist.