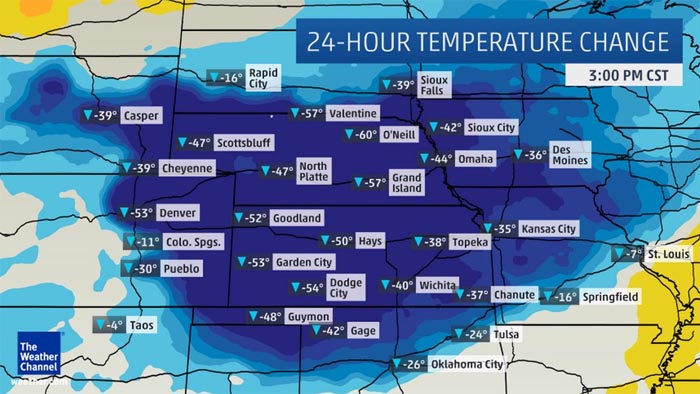 Christopher Burt, Weather Historian for Weatherunderground has documented in his blog the dramatic temperature drop in the plain states over the Thanksgiving weekend.

Near Record Drop in Temperature in Plains November 29-30

A cold front passed through Montana and Wyoming on Saturday November 29th and then pushed south and east over the Great Plains dropping temperatures as much as 70° in a matter of hours.

Temperature change over the 24-hour period from 3 p.m. November 29th to 3 p.m. November 30th. In fact, even greater falls of temperature occurred at various sites over different periods of time. Map graphic courtesy of The Weather Channel.

Amazing as these figures are they do not represent all-time record temperature changes for the U.S. The famous cold front of November 11, 1911 was the most extreme such on record. On that day an intense cold front swept quickly across the Great Plains and Midwest where Kansas City, Missouri fell from 76° to 11° in 12 hours. Oklahoma City fell from 83° to 17° and Springfield, Missouri from 80° to 13°. In all three cases the cities recorded both their daily record high and daily record low temperature for November 11th.

The thermograph trace from Springfield, Missouri actually shows that the high temp was at least 81° on November 11th at around 3:45 pm. It also shows that by midnight that same day the temperature had fallen to 10°. The ‘official’ range of temperature for the day of 80° to 13° is not correct if the thermograph is accurate. The office only reported hourly temps for their daily summary and concluded that the 11 p.m. temp of 13° was the lowest for the day when, in fact, it had reached 10° by midnight. The 81° high also occurred between hourly reports. A drop of 40° occurred in 15 minutes between 3:45 p.m. and 4:00 p.m. was observed and the 71° drop in eight hours is almost unprecedented in meteorological records, although two locations in Arkansas (Rogers and Fayetteville) measured a 72° drop in temperature during the same period from 81° to 9°. Graphic from NWS-Springfield office.

Chicago dropped from 74° at 1pm to 13° by midnight on the 11th, and the Monthly Weather Reviewstated “one man was overcome by heat and two others frozen to death in the short space of 24 hours” (sounds like a little journalistic license here!).