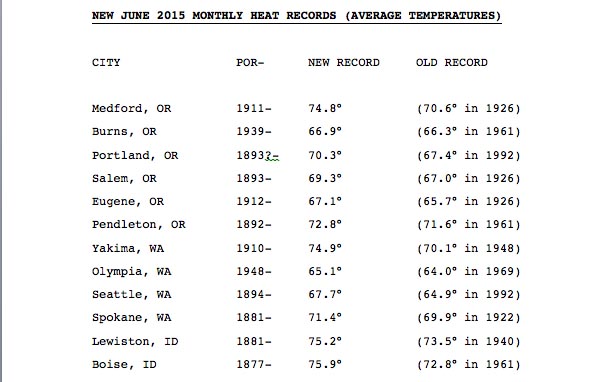 Pacific Northwest on Track for Warmest Summer on Record

By: Christopher C. Burt , 3:30 AM GMT on August 01, 2015
Share this Blog
Short Link
Full Link
11
+
Pacific Northwest on Track for Warmest Summer on RecordAnother heat wave has engulfed much of the U.S. Pacific Northwest the past few days with Seattle, Washington now having observed twelve 90°+ temperatures so far this summer (as of Aug. 1st), an all-time record (9 such days in 1958 was the previous) and also July has been their warmest month ever observed. For some of the cities in the Northwest this has been the warmest June-July period ever measured and, barring a very cool August, will end up being the warmest climatological summer on record (June-August). Here are some details.After enduring its warmest June on record Seattle has now endured its warmest July on record (see tables below for the figures) and thus its warmest single month on record. It also has been exceptionally dry with only .09” precipitation measured in July (normal is .66”) and .23” in June (normal is 1.43”). However, this is still no match for the June-July period of 1922 when only .03” accumulated! The July 2015 average temperature of 71.2° is also the city’s all-time (any month) heat record (previous 71.1° in August 1967). Portland, Oregon is also on track for enduring its warmest summer on record following a record warm June and near-record warm July. In fact, July 30th was one of the hottest days on record for much of Oregon’s Willamette Valley. Corvallis Airport reached 108°, tying the town’s all-time (any month) record last set on August 10, 1981 at Corvallis State University (POR since 1889). Roseburg, further south, also reached 108°, just 1° shy of its all-time (any month) record of 109° set on July 20, 1946. Salem and Eugene both observed daily record highs of 105° (all-time records for both cities are 108° set on August 9, 1981) and Portland reached 103°, short of its record of 107° measured on three previous occasions. In Eugene, seven 100°+ days have so far been recorded this summer (including on Aug. 1st), surpassing the previous record of five such back in 1978. On July 31st The Dalles and Pendleton (in Oregon) hit 109°, the warmest temperatures measured so far during the current heat wave for first order stations. Neither are all-time records (111° on several occasions for The Dalles and 115° for Pendleton). Salem, Oregon has just experienced its warmest month on record (see table below). The coastal sites in northern Oregon and Washington have also been exceptionally mild. Quillayute, Washington was just short of its warmest month on record with a 63.0° average temperature for July (in August 2013 the average was 63.1°). Astoria, Oregon has had its single warmest month since July 1941 with an average of 64.1° (in 1941 the July average was 64.6°).In the tables below are sites in the Northwest that observed their all-time warmest June on record, how they fared in July, and what their combined June-July averages have been relative to their warmest climatological (June-August) summers on record. It would appear that Medford, Portland, and Salem in Oregon, as well as Seattle, Yakima, and Spokane in Washington are likely to end up with their warmest summers on record barring a very cool August. One aspect of this is that (should the heat trend continue) Yakima, Washington and Portland, Oregon will see back-to-back record warm summers. They just observed their hottest summer on record LAST summer in 2014!

Pacific Northwest Watershed drought monitor map for July 28th. Note how rapidly conditions have deteriorated in the past several months. Map from NOAA et al.The hot weather and dry conditions have critically impacted the sockeye salmon runs along the Columbia River and its tributaries. Federal and state fishery biologists estimate that up to 80% of the salmon may perish since the fish become stressed at water temperatures above 68° and stop migrating when the water reaches 74° or higher. Many of the Columbian River tributaries are already measuring temperatures above 76°. The Columbian River itself is running at its lowest level for this time of the year in 60 years according to U.S. Fish and Wildlife Service officials.

The Columbia River is running at its lowest level in almost 60 years for this time of the year, threatening the annual sockeye salmon run. Photo from Freestock. comP.S. June of 2015 saw many other all-time monthly records at other sites outside of the Pacific Northwest (PNW figures included in the table as well). See:

I’ll be updating this blog as the new numbers for August and the NOAA/NCDC data for July become available.Christopher C. BurtWeather Historian