Dr. Cliff Mass of the University of Washington blogged on the Winter so far with emphasis on the Pacific Northwest.  However he does provide interesting information relative to Wyoming as well.

We are now roughly mid-winter and thus can gain a bit of perspective regarding the nature of the season.


Over the western U.S (see below).,  temperatures during the past two months have generally been slightly below normal over most of the western U.S., which is very different than the unusual warmth of last year.

For precipitation, western Washington has been much wetter than normal, but the rest of the west has been generally near normal.

To get a better idea of timing, here are the temperatures and precipitation at Seattle over the past 12 weeks, with normal values shown.  Seattle has had warm and cool periods, but on average, quite normal.

For precipitation, there were extended wet and dry periods.  Middle to the end of December was super wet, and we have been very dry for the first part of January.  For the overall period, about 6 inches more than normal.

Turning to Pasco, in central eastern WA, temperatures were near normal.

while precipitation was close to normal for the entire period.

Bottom line: On both sides of the Cascades, a very different than last year, which was warmer and drier.

Looking forward for the rest of the winter, we should experience the influence of a powerful El Nino, with the heaviest precipitation heading into California, leaving Washington modestly drier than normal.  The latest 10 day total precipitation forecast from the National Weather Service GFS model, shown below, predicts a wet period for the west coast, with very heavy precipitation (15 inches!) over central/northern CA.  This period should have a major impact on reservoirs and could potentially lead to localized flooding in northern CA. 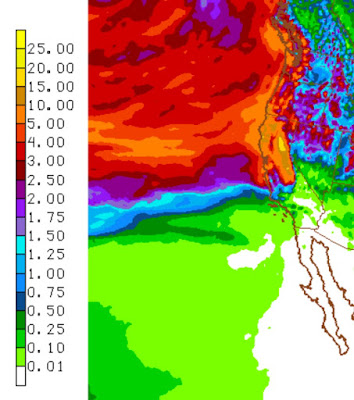 Regarding snow, the next 72 h should bring modest freshening of snow to the Northwest, but heavy snow over the Sierra:

The bottom line is that this winter is radically different than last year so far, without the extreme heat and snowpack drought of last year.