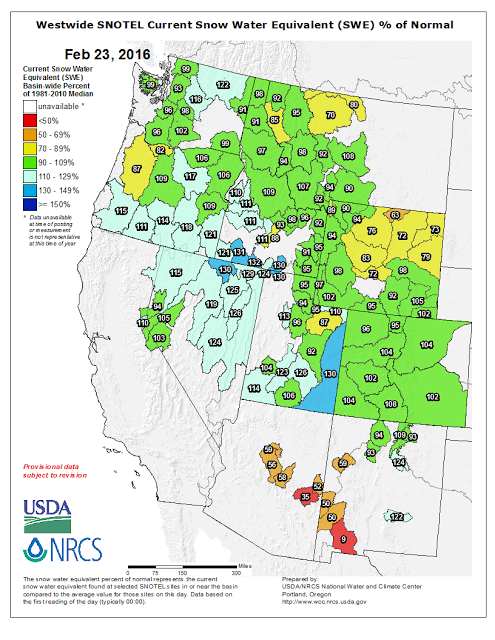 Thanks to Dave Steenburgh of the UofU for this interesting blog on the effects of El Nino in the western states.

Where Art Thou El Nino?

As we near the end of February and the home stretch of the snowpack accumulation season, snowpack water equivalents are running pretty close to average across much of the western U.S.

There is, however, reason to be concerned in the southwest where the snowpack in the mountains of Arizona and much of New Mexico are running below average.  I flew over this area about 10 days ago and was blown away by the lack of snow.  Similarly, the southern Sierra are now running at only 88% of average for the date (left hand value below, right is percent of the April 1st average).

And, while one always needs to be cautious with extended-range forecasts, there’s really not much being produced by the models over the next 1-2 weeks for the southwest.  Just to underscore that point, below is the 8-14 day precipitation outlook for the first week of March.

Oh, where art thou El Nino? I see your warm sea-surface temperatures, but where are your storms?