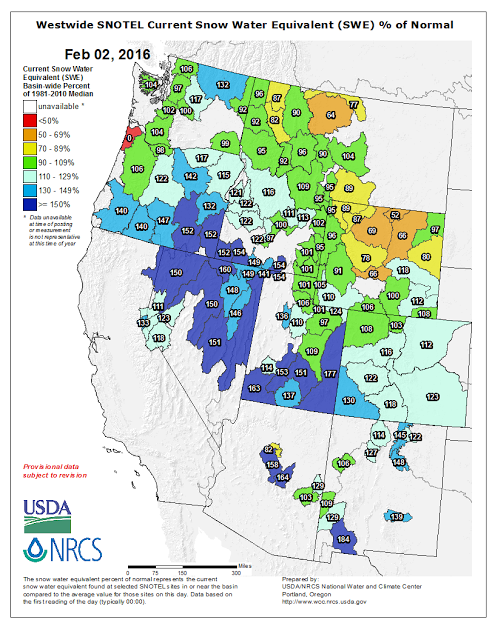 Jim Steenburgh of the UofU provides a pessimistic review of the poor snowfall across much of the west in the month of February. While still below normal much of Wyoming  changed little during February.

As far as snowfall and snowpack in the southwest are concerned, February was a disaster.

Below is the percent of average snowpack analysis from February 2nd (when I grabbed it for a blog post) showing very healthy conditions relative to average for that time of year across much of the southwest.

Fast forward to today and you can see that we have failed to keep pace with the climatological buildup of the snowpack in nearly every drainage basin in California, Nevada, Utah, Colorado, Arizona, and New Mexico.  The situation in Arizona and New Mexico (as well as the south Sierra not shown here) was especially disastrous.
Let’s take a look at a few select stations.  At Snowslide Canyon in Arizona (9730 ft), the peak snowpack was achieved in mid January, after which the snowpack has not only lost some ground to climatology, but also in absolute terms, with a slight decrease in total water equivalent.
If we go to lower (and warmer) elevations, the situation is even worse.  At Baker Butte (7300 ft), the snowpack is gone as of today.
How about a snowier location like Squaw Valley near Lake Tahoe?  It hit the wall at 30 inches of water equivalent at the end of January and has been flatlined ever since.

Areas that didn’t do too badly are in the northern tier of the western U.S.  Paradise Ranger Station on Mt. Rainier, for example, is still tracking close to median (lower elevation sites in the Cascades lost some ground).

Similarly, one can find sites in the northern interior that were able to preserve or in some cases close the gap relative to the lack of snow earlier this winter.  Good for them.

We’ll have to see if the advertised pattern shift in a few days comes through and if the southwest snowpack can get back on track.