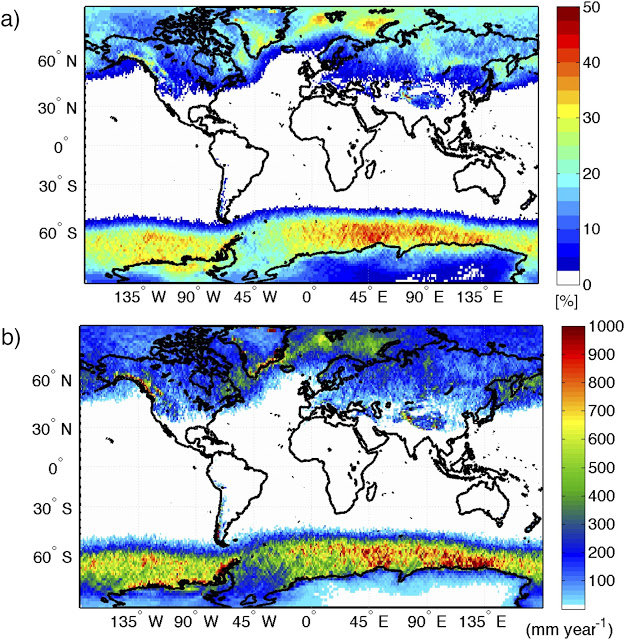 Interesting blog posted by Jim Steenburgh of the U of U on where besides Star Valley it can snow a lot.

Where Are the Snowiest Regions on Earth?

A remarkable global snow climatology has recently been developed by scientists from the Space Science and Engineering Center (SSEC) at the University of Wisconsin–Madison (see Kulie et al. 2016; access to full article may be paywalled unless you or your institution are subscribers to the American Meteorological Society Journals).
Producing such a climatology is a major challenge.  Reliable snow observations are fairly limited over land, especially in the high latitudes, and nearly non existent over the oceans.  Thus, Kulie et al. (2016) take advantage of the cloud profiling radar on NASA’s CloudSat satellite to develop their climatology.  The CloudSat profiling radar has a wavelength of only 3.2 mm, much smaller than the 3 to 10 cm wavelength commonly used for traditional weather radars.  This makes the radar more sensitive to smaller cloud droplets and ice crystals.
The Kulie et al. climatology incorporates CloudSat observations from June 2006 through December 2010.  Because of their global focus, these observations are binned into 1 degree latitude–longitude boxes (about 100 by 100 km at midlatitudes).  Thus, the climatology will not pick up on smaller scale snowfall microclimates such as those found in North America.  However, the results are still quite fascinating.
The figures below show the ratio of CloudSat observations with snow (an approximate measure for snowfall frequency) and the estimated liquid equivalent of snowfall.  Values are highest in the mid and high latitudes, especially along the Southern Hemisphere storm track and in North Atlantic and Barents Sea.  So much snow falling on water.  What a waste!
Even at this very coarse resolution, the coastal mountains of northwest North America stand out, as do the southern Andes.  If you blow the image up, you can also find high values over high mountain Asia, especially in the western Himalayas and Karakoram, which experience a greater fraction of precipitation produced by disturbances in the midlatitudes westerlies.  Southeastern Greenland also stands out as a snowfall hotspot.
Unfortunately, this grid spacing does not allow us to examine the small-scale characteristics of snowfall in many areas and largely smooths out the effects of narrow topographic features such as those found in the western U.S.  Looking forward to seeing what the can strain out on regional scales.
By Jim S Posted at 4/19/2016 09:31:00 AM 4 comments: