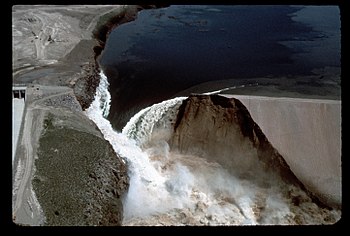 From Wikipedia, the free encyclopedia
The Teton Dam was an earthen dam on the Teton River in Idaho, United States. It was built by the Bureau of Reclamation, one of eight federal agencies authorized to construct dams.[3] Located in the eastern part of the state, between Fremont and Madison counties, it suffered a catastrophic failure on June 5, 1976, as it was filling for the first time.
The collapse of the dam resulted in the deaths of 11 people[4] and 13,000 cattle. The dam cost about $100 million to build, and the federal government paid over $300 million in claims related to its failure. Total damage estimates have ranged up to $2 billion.[5] The dam has not been rebuilt.

There had been interest in building a dam in the eastern Snake River Plain for many years to control spring runoff and provide a more constant water supply in the summer. The area had suffered a severe drought in 1961, followed by serious flooding in 1962. The Bureau of Reclamation (USBR) proposed the Teton Dam in 1963, and Congress passed without opposition an authorizing bill the following year. The planned dam was to be an earthen structure 310 feet (94 m) high and 0.6 miles (1.0 km) long and create a reservoir 17 miles (27 km) in length. The impounded water would be used to generate hydroelectric power. An environmental impact statement was issued for the dam in 1971, but it did not raise the possibility of a collapse.[3]
The primary contractor for the dam was Morrison-Knudsen Co. of Boise, assisted by Peter Kiewit Sons Co. of Omaha, Nebraska. The $39 million contract was awarded in December 1971 and work began in 1972.[1]
The eastern Snake River Plain is almost entirely underlain by basalt erupted from large shield volcanos on top ofrhyolitic ash-flow tuff and ignimbrites.[6] The tuff, a late-Cenozoic volcanic rock is 1.9 million years old. The dam site is composed of basalt and rhyolite, both of which are considered unsuitable for dam construction because of their highpermeability. This was confirmed by long term pump-in tests at rates of 165 to 460 US gallons (620 to 1,740 litres) per minute.[7] Test cores, drilled by engineers and geologists employed by the Bureau of Reclamation, showed that the rock at the dam site is highly fissured and unstable, particularly on the right side of the canyon. The widest fissures were determined to be 1.7 inches (4.3 cm) wide. The Bureau planned to seal these fissures by injecting grout into the rock under high pressure to create a grout curtain in the rock.
In addition, an investigation of the area by geologist of the U.S. Geologic Survey indicated that it was seismically active: five earthquakes had occurred within 30 miles (50 km) of the dam site in the previous five years, two of which had been of significant magnitude. This information was provided to the Bureau of Reclamation in a memorandum, but the geologists’ concerns were considerably watered down in the six-month re-drafting process before the USGS sent the final version of the memo to the USBR in July 1973.[3]
In 1973, when the dam was only half-built, but almost $5 million had already been spent on the project, large open fissures were encountered during excavation of the key trench near the right end of the dam, about 700 feet (210 m) from the canyon wall. The two largest, near-vertical fissures trend generally east-west and extend more than 100 feet (30 m) below the bottom of the key trench. Some of the fissures are lined by calcite, and rubble fills others. Several voids, as much as 6 inches (15 cm) wide, were encountered 60 to 85 feet (18 to 26 m) below the ground surface beyond the right end of the dam and grout curtain.[7] The largest fissures were actually enterable caves. One of them was eleven feet (3.4 m) wide and a hundred feet (30 m) long. Another one was nine feet (2.7 m) wide in places and 190 feet (60 m) long. These were not grouted because they were beyond the keyway trench and beyond the area where the Bureau had decided grouting was required.[8] This necessitated using twice as much grouting as had been originally anticipated – 118,000 linear feet were used in total. Later, the report of a committee of the House of Representatives which investigated the dam’s collapse felt that the discovery of the caves should have been sufficient for the Bureau of Reclamation to doubt its ability to fill them in with grout, but this did not happen: the Bureau continued to insist, even after the dam had failed, that the grouting was appropriate.[3]

The dam was completed in November 1975, and filling the reservoir began at the standard rate of 1 foot (0.30 m) a day. However, snows were heavy that winter, and five months later the project’s construction engineer requested permission to double the filling rate in order to deal with the additional spring run-off, while continuing to inspect for leaks and monitor the groundwater. A month later, even though monitoring showed that groundwater was flowing a thousand times faster than had been originally anticipated, the filling rate was doubled again, to 4 feet (1.2 m) a day.[3]
On June 3 and 4, 1976 three small springs were discovered downstream of the dam, although the water running through the leaks was clear, and such leaks are not unexpected for an earthen dam. At the time, the reservoir was almost at capacity, with a maximum depth of 240 feet (73 m). The only structure that had been initially prepared for releasing water was the emergency outlet works, which could carry just 850 cubic feet per second (24 m3/s). The main outlet works and spillway gates were not yet in service: the gates were cordoned off by steel walls while they were being painted.

On Saturday, June 5, 1976, at 7:30 a.m. Mountain Daylight Time (MDT), a muddy leak appeared, suggesting sediment was in the water, but engineers did not believe there was a problem. By 9:30 a.m. the downstream face of the dam had developed a wet spot which began to discharge water at 20 to 30 cubic feet per second (0.57 to 0.85 m3/s) and the embankment material began to wash out. Crews with bulldozers were sent to plug the leak, but were unsuccessful. Local media appeared at the site, and at 11:15 officials told the county sheriff’s office to evacuate downstream residents. Work crews were forced to flee on foot as the widening gap, now larger than a swimming pool, swallowed their equipment. The operators of two bulldozers caught in the eroding embankment were pulled to safety with ropes.
At 11:55 a.m. MDT (UTC-17:55), the crest of the dam sagged and collapsed into the reservoir; two minutes later the remainder of the right-bank third of the main dam wall disintegrated. Over 2,000,000 cubic feet per second (57,000 m3/s) of sediment-filled water emptied through the breach into the remaining 6 miles (10 km) of the Teton River canyon, after which the flood spread out and shallowed on the Snake River Plain. By 8:00 p.m. that evening, the reservoir had completely emptied, although over two-thirds of the dam wall remained standing.

Study of the dam’s environment and structure[9] placed blame for the collapse on the permeable loess soil used in the core and on fissured (cracked) rhyolite in the abutments of the dam that allowed water to seep around and through the earth fill dam. The permeable loess was found to be cracked. It is postulated that the combination of these flaws allowed water to seep through the dam and led to internal erosion, called piping, that eventually caused the dam’s collapse.
An investigating panel had quickly identified piping as the most probable cause of the failure, then focused its efforts on determining how the piping started. Two mechanisms were possible. The first was the flow of water under highly erodible and unprotected fill, through joints in unsealed rock beneath the grout cap, and development of an erosion tunnel. The second was “cracking caused by differential strains or hydraulic fracturing of the core material.” The panel was unable to determine whether one or the other mechanism occurred, or a combination:

The fundamental cause of failure may be regarded as a combination of geological factors and design decisions that, taken together, permitted the failure to develop.

A wide-ranging controversy ensued from the dam’s collapse. According to the Bureau of Reclamation, BOR engineers assess all Reclamation dams under strict criteria established by the Safety of Dams program. Each structure is periodically reviewed for resistance to seismic stability, internal faults and physical deterioration.[4] The dam safety program identified two other dangerous dams – Fontenelle, which very nearly failed like the Teton Dam when it was filled and again in May 1985 and the Jackson Lake Dam which would have failed during an earthquake on the nearby Teton Fault.

Teton Canyon ends approximately six miles below the dam site, where the river flows onto the Snake River Plain. When the dam failed, the flood struck several communities immediately downstream, particularly Wilford at the terminus of the canyon, Sugar City, Salem, Hibbard and Rexburg. Thousands of homes and businesses were destroyed. The small agricultural communities of Wilford and Sugar City were wiped from the river bank. Five of the fourteen deaths attributed to the flood occurred in Wilford. The similar community of Teton City, on the south bank of the river, is on a modest bench and was largely spared.[10] One Teton resident was fishing on the river at the time of the dam failure and was drowned. An elderly woman living in Teton City died as a result of the evacuation.[11]
One estimate placed damage to Hibbard and Rexburg area, with a population of about 10,000, at 80 percent of existing structures. The Teton River flows through the industrial, commercial and residential districts of north Rexburg. A significant reason for the massive damage in the community was the location of a lumber yard directly upstream. When the flood waters hit, thousands of logs were washed into town. Dozens of them hit a bulk gasoline storage tank a few hundred yards away. The gasoline ignited and sent flaming slicks adrift on the racing water.[12] The force of the logs and cut lumber, and the subsequent fires, practically destroyed the city.
The flood waters traveled west along the route of the Henry’s fork of the Snake River, around both sides of the Menan Buttes, significantly damaging the community of Roberts. The city of Idaho Falls, even further down on the flood plain, had time to prepare. At the older American Falls Damdownstream, engineers increased discharge by less than 5% before the flood arrived.[13] That dam held, and the flood was effectively over, but tens of thousands of acres of land near the river were stripped of fertile topsoil.[5]
The force of the failure destroyed the lower part of the Teton River, washing away riparian zones and reducing the canyon walls. This seriously damaged the stream’s ecology and impacted the native Yellowstone cutthroat trout population. The force of the water and excessive sediment also damaged stream habitat in the Snake River and some tributaries, as far downstream as the Fort Hall bottoms.
After the dam’s collapse, debris clean-up began immediately and took the remainder of the summer. Rebuilding of damaged property continued for several years. Within a week after the disaster, President Gerald Ford requested a $200 million appropriation for initial payments for damages, without assigning responsibility for Teton Dam’s failure.[14]
The Bureau of Reclamation set up claims offices in Rexburg, Idaho Falls, and Blackfoot. By January 4, 1977, disaster victims filed over 4,800 claims totalling $194 million. By that date, the federal government paid 3,813 of those claims, $93.5 million. Originally scheduled to end in July 1978, the claims program continued into the 1980s. At the end of the claims program in January 1987, the federal government had paid 7,563 claims for a total amount of $322 million.
.