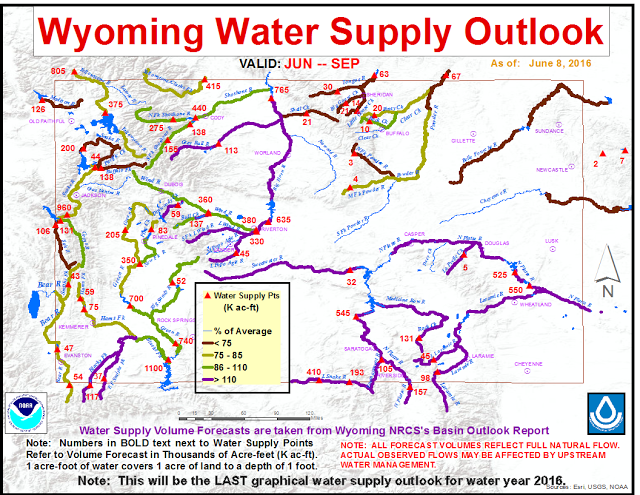 The final  report for the Wyoming Water Supply Outlook for 2016 from the Riverton NWS Office is very optimistic with much of the state expecting to be near or above normal gong into the  summer months.

Synopsis:
May precipitation totals across Wyoming were 115 to 125 percent of average. Precipitation numbers varied between 225 percent of normal over the Lower Green River Basin (southwestern Wyoming) to near 55percent of normal over the Belle Fourche River Basin (northeastern Wyoming).  Current water year (October 2015 – May 2016) precipitation across Wyoming remained near 120 percent of average.
Mountain snowpack across Wyoming increased to 105 to 115 percent of median by early June.  Snowpack “water” numbers and/or SWEs were the highest across basins in central through southern Wyoming—varying between 130 to 150 percent of median.  SWEs across the Snake and Upper Yellowstone  Watersheds varied between 65 to 75 percent of median.
Near normal (95 to 100 percent) snowmelt streamflow volumes are expected across the state as a whole.  Above normal streamflow volumes are expected across a majority of the Wind River, the Big Horn, the Upper North Platte, and the Laramie Watersheds.  The Upper Yellowstone, Snake, Powder, and Tongue River Basins are forecasted to have below normal streamflow volumes during the rest of the snowmelt season.
Reservoirs storages across Wyoming increased to 120 to 130 percent for early June.