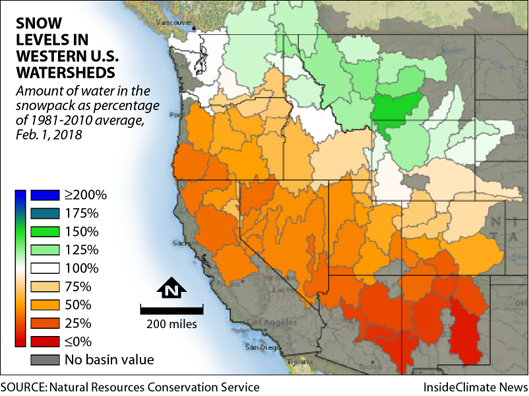 Stay informed about the latest climate, energy and environmental justice news by email. Sign up for the ICN newsletter.
The snowpack that’s essential for California’s water supply is at critically low levels again this year—approaching the historic lows of the state’s prolonged drought, which officially ended in 2016.

On Thursday, researchers from the state’s Department of Water Resources headed into the Sierra Nevada to measure water content and snow levels at the Phillips Station near Lake Tahoe. The annual event, while something of photo op, is an opportunity to alert California residents if they’ll need to conserve water in the coming months.

“This year it’s going to be pretty stark,” said Daniel Swain, a climate scientist at UCLA. “There’s not going to be a lot of snow on the ground.”

Frank Gehrke, chief of the state water survey, measured the snow depth at Phillips at 13.6 inches, with 2.6 inches of water content—about 14 percent of the average. Overall, snowpack in the Sierras—which provides roughly a third of the state’s water supply—is at 27 percent of normal for February 1.

Historically, the state’s April 1 number, when the snow season is over, has been used as the key metric for the year. Toward the end of the 2011-2016 drought, the snowpack on April 1, 2015, was at 5 percent. The previous low had been 25 percent.

On April 1, 2015, Gov. Jerry Brown stood on bare ground at the Phillips Station and declared that the state’s urbanites would have to drastically cut their water use. Whether he will make the same declaration this year is not yet clear.

“Some people are trying to draw a parallel to 2015, but we’re not saying a drought is on the way,” said Doug Carlson, a spokesman for the water division. “We’re just saying we have disappointing snowpack readings, as well as disappointing precipitation.”

Roughly half of the state’s precipitation falls from December through February. So far, there’s been little precipitation in parts of the state, and the forecast is showing little relief and calling for higher temperatures.

“The pattern that’s in place right now is a really stable one, and unfortunately it’s going to bring record warmth to northern California,” Swain said. “The snowpack will actually start to decrease.”

The good news for people in the cities and suburbs is that the state’s reservoirs remain in pretty good shape, thanks to a wet winter a year ago. But for the state’s forests and natural landscapes—and for certain counties—that’s of little help.

Santa Barbara and Ventura counties are not tied into the reservoir system, and in December those counties experienced the state’s largest wildfire on record, fueled by tinder-dry vegetation. October and November set heat records in Southern California.

The situation looks just as worrisome across much of the West. At the beginning of the year, the snowpack was unusually low across swaths of Colorado, Utah, New Mexico and Arizona.

Michelle Mead of the National Weather Service said Thursday at California’s Phillips Station that she was optimistic the winter could still provide badly needed snow, and that more “atmospheric rivers”—carrying rain from the tropics—may still be on the way.

“California’s weather is very, very variable,” Mead said. “The state, as a whole, has had two atmospheric rivers and we average five. We still have half a winter to go.”