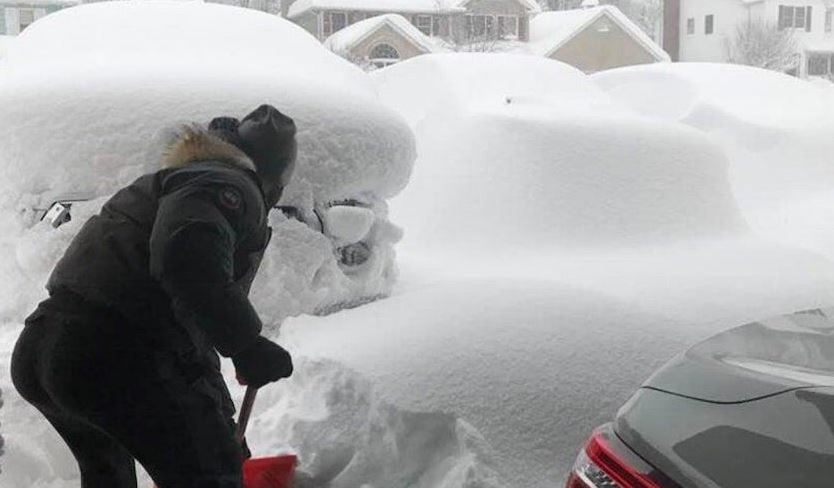 In late October, I posted a Category 6 entry about U.S. state precipitation extremes. This month I tackle a similar topic: state snowfall extremes. The 2019-2020 snow season has already gotten off to a big start in portions of the Upper Great Lakes region. Madison, Wisconsin experienced its snowiest start on record (period of record 1884-), with 15.7” of snowfall observed at Truax Airport through November 23. Madison’s seasonal normal is 50.9” and record was 101.4” in 2007-2008. The snow cover of 22” at Duluth, Minnesota, on December 1 tied with 1985 for the largest on record there on the first day of meteorological winter (period of record 1884-).

More than 46% of the contiguous U.S. had snow cover on December 2, the largest percentage in NOAA records dating back to 2003.

Unlike the state precipitation records, there have been no state snowfall records established since 2017 of which I’m aware. The winter of 2017-2018 saw Erie, Pennsylvania set city snowfall records for the season (166.0”), the month of December (93.8”), and any 24-hour period (32.6”). However, the originally reported storm total of 65.1” for December 24-27, 2017, and monthly total of 121.3”—which would have been state records—were later corrected, after the State Climate Extremes Committee (SCEC) found issues in snow-total reporting and snowboard placement that appear to have inflated the totals (see the initial SCEC findings).

Earlier that year Chimney Pond, Maine, established a state record for greatest depth of snow when 94.0” was measured on February 16, 2017. The previous month (January 2017) was the snowiest month on record for anywhere in Nevada when the Mt. Rose Ski Resort reported a monthly total of 295.0”. The most recent state 24-hour snowfall record is 36.0” at Ansonia, Connecticut during the big blizzard of February 8-9, 2013 (Hamden reported an unofficial 40.0” in 24-hours during this storm).

Figure 1 below shows the results of my research into the 24-hour snowfall records for each state. The data was originally compiled by weather historian David M. Ludlum and published in his 1970 booklet “Weather Record Book: U.S. and Canada” (a Weatherwise magazine publication) and since updated by myself. Not all of these are official records recognized by the SCEC. You can find the SCEC list (but almost exclusively just for each state’s 24-hour snowfall record, not monthly or seasonal) here. The reason(s) their list and my list do not completely jibe is that I include some records that were not officially measured at a sanctioned COOP or other U.S. weather bureau site.

An interesting recent addition to the SCEC list is the reported 78.0” snowfall in 24 hours at Camp 47, Alaska on February 7, 1963. I co-authored a blog post concerning this with Alaskan climatologist Brian Brettschneider back in November 2014 with a request to have the record officially investigated by the NCEC (National Climate Extremes Committee) since the figure would be a new U.S. national record for the greatest 24-hour snowfall ever reported, thus besting the officially accepted 75.8” measured at Silver Lake, Colorado on April 14-15, 1921. The Alaskan SCEC (State Climate Extremes Committee) did perform an official investigation and concluded that it was a valid figure (as can be seen on their list of state records) but the NCEC apparently does not recognize this record as official.

Other candidates for state (and national) snow records

A report of 77.0” of snow in 24-hours in Montague Township, New York (Tug Hill Plateau area) on January 11-12, 1997 was investigated by an ad hoc committee organized by the National Weather Service and determined to be invalid as a result of too many measurements made within the 24-hour period in question. The snowboard should have been cleared only four times—every six hours—rather than the six clearings made by the observer. See the full report for details.

As borne out in Montague Township, the more often snow is measured during a given storm, the higher the resulting totals, which is why the six-hour frequency has been set as a standard to establish consistency among reporting sites. Up through the mid-20th century, snow totals were typically taken by measuring the depth on the ground at the end of the storm, a practice that would have underestimated storm totals by today’s standards. See the 2015 writeup “Snowfall Measurement: A Flaky History”, by Matthew Kelsch (UCAR) for more on this and other quirks of snowfall measurement practices over the years.

Regardless of the observational concerns at Montague Township, the NWS report notes that the snow depth on the ground increased by 51” in 24 hours, which implies that (especially when compacting is considered) more snow did fall in 24 hours here than the SCEC official state record for New York of 49.0” in Watertown on November 14-15, 1900. The SCEC also mentions an unofficial but credible record for New York State of 54” at Barnes Corner on January 9, 1976, during the same storm that also dumped 68” in 24 hours in nearby Adams (which is on my list as New York’s record).

Besting any of these possible contenders for the U.S. 24-hour snowfall record (including Camp 47 in Alaska) is the 84” measured in one 24-hour period at the Crestview maintenance station of the California Highway Department on January 14-15, 1952. The storm total was 149” over the week of January 11-17, a number that became famous as a result of the Southern Pacific Railroad’s flagship train, City of San Francisco, becoming trapped in the snow near Donner Pass (Yuba Gap to be exact, just west of Donner Pass) for three days beginning January 13. The train lost power and food supplies for the 226 passengers before a rescue party arrived.

Another credible candidate for a national snow record also comes from near the same location in the Sierra Nevada: a single-storm record of 194” measured at the Norden train depot near Donner Summit on April 20-23, 1880. The figure is consistent with surrounding observations including Sacramento’s still-standing 24-hour rainfall record of 7.24” on April 20-21 (and 8.81” altogether over a 48-hour period). Read more about this historic storm in a WU blog entry I posted in April 2015.

Here are a few other candidates for state snowfall records. See Figure 4 below for a complete list, arranged by state and duration.

WISCONSIN: Spooner measured a 45.0” storm total on March 10-15, 1899. Note that this snowfall was not directly measured; instead, it was inferred from the moisture in snowmelt, using a 10-to-1 ratio. As Kelsch observed in the UCAR article, this practice was common at cooperative observing sites prior to the mid-20th century. If the snow ratio in Spooner was greater than 10-to-1, which is often the case, then the Spooner total was likely even higher.

A NOAA/NCEI website article, Climate Change and Extreme Snow in the U.S., posits: “Years with heavy seasonal snow and extreme snowstorms continue to occur with great frequency as the climate has changed. The frequency of extreme snowstorms in the eastern two-thirds of the contiguous United States has increased over the past century. Approximately twice as many extreme U.S. snowstorms occurred in the latter half of the 20th century than the first. Conditions that influence the severity of eastern U.S. snowstorms include warmer-than-average ocean surface temperatures in the Atlantic.”

This would imply the period of 1950-2000 vs that of 1900-1950 have seen more extreme snow events, although it was not until the 1980s that warming of global temperatures began to predominate over multi-decade ups and downs. The 1970s, of course, saw some of the coldest and snowiest winters on record for the eastern two-thirds of the U.S. However, research into other events, such as heavy rainfall, suggests a greater influence from climate change on U.S. extreme weather since the 1980s. Perhaps changes in snow measurement practice since 1950, as discussed above, are also in the mix.

A more in-depth look at the issue of climate change and snowfall can be found in an excellent article published in Scientific American this past January titled “Love Snow? Here’s How It’s Changing.” The author, Chelsea Harvey, explains that climate change is having an effect on snowfall that is complex and not well understood yet. “Scientists broadly agree that snow will change in most places as the climate continues to warm…but exactly how and why, from one location to the next, may be among the most challenging questions about weather and climate change”. Another good take on this subject is the article “Snowfall Totals Are Changing Across the U.S.,” published by Climate Central in 2017.