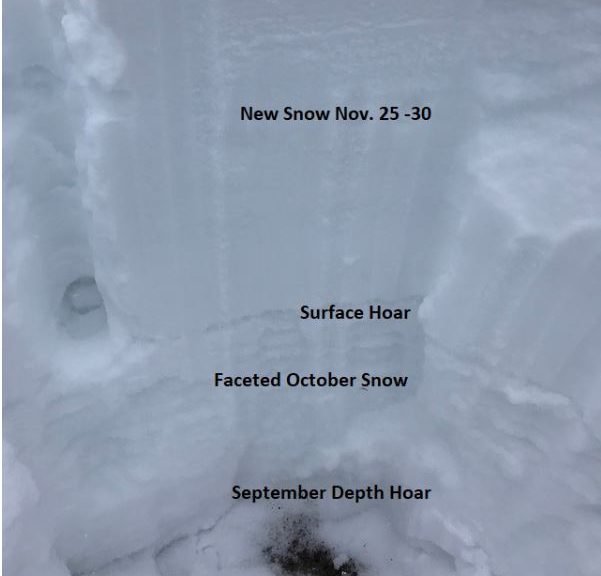 A natural avalanche cycle occurs and large, slab avalanches are human triggered with two close calls on persistent weak layers
The storm cycle that began during the previous week brought abundant snowfall to the region on the evening of November 29 and into the morning hours on November 30. Snowfall intensities exceeded an inch per hour after sunset on November 29 until the storm ended in the morning on November 30. Snowfall totals during this period ranged from 12 to 24 inches. This intense snowfall overloaded persistent weak layers of old snow and caused large slab avalanches to release naturally. Figure 10.1 Infrared satellite image provided by the National Weather Service on November 29. A huge fetch of moisture that is moving into Western Wyoming in a southerly flow is visible in this image. Figure 10.2 Infrared satellite image provided by the National Weather Service on November 30. At this time a potent storm system was located over Western Wyoming.

The storm cycle that began on November 25 and ended on November 30 brought 20 to 40 inches of new snow to the mountains in our forecast area. At the upper elevations and on northerly aspects at the mid elevations this new snow accumulated on old snow that experienced surface hoar growth and had been subjected to advanced stages of faceting. On November 29 a skier triggered a one-foot deep slab avalanche on a northeast aspect of Thanksgiving Bowl that stepped down to a depth of 50 inches in that faceted old snow. A smaller soft slab avalanche was skier triggered on an adjacent slope the day before. Similar events were skier triggered in the Togwotee Pass area on November 29. Figure 10.3 Chunks of debris from a slab avalanche that was skier triggered on a northeast aspect of Thanksgiving Bowl on November 29.

The intense snowfall that occurred in the evening on November 29 and in the early morning hours on November 30 triggered a natural avalanche cycle that failed on steep slopes where old snow existed before the storm cycle began on November 25. Figure 10.4 Photograph of a snow pit that was conducted on November 29 on a shaded aspect near Mt. Elly on Teton Pass. In this image the new snow that fell from November 25 to November 29 lies upon a layer of well-developed surface hoar that formed during the evening hours on November 22 & 23. That persistent weak layer sits upon snow that fell in October and September that became faceted during an extended dry period in November. Figure 10.5 Photograph taken on November 30 of a location were several large slab avalanches released naturally on a slope where avalanches have not been observed to have occurred since at least the 1990’s. These slabs failed near the end of a 16-hour period of intense snowfall (23 inches). Figure 10.6 Photograph taken from Mt. Glory on December 1 of soft slab avalanches that released naturally in the upper portion of the Mail Cabin Creek drainage on November 30. Figure 10.7 Debris from a soft slab avalanche that was remotely triggered by a skier on November 30. That skier was above the slide near Christmas Tree Bowl in flat terrain on a skin track when they triggered this slide. Figure 10.8 Photograph taken on December 1 looking down from the crown of a soft slab avalanche that was triggered by a snowboarder on the previous day. That boarder was caught, carried 800 yards and partially buried. When this slide ran it removed snow from the limbs in lower sections of pine trees along the gulley edges in the run-out zone. The lower portion of those trees are green in this image.

In the mountains, temperatures were in the teens and 20 on November 29 and in the single digits and teens on November 30. On those days strong southerly winds backed to the east, the north and then to the west. On the high peaks wind speeds averaged 20 to 30 with gusts from 40 to 60 miles per hour.

A small storm system that moved into the region from the southwest brought another 3 to 5 inches of new snow to the mountains on December 2. Skies were partly to mostly cloudy during the last three days of this week. Temperatures during those days were mostly in the teens and 20’s. Winds were from the west-northwest to southwest at 12 to 24 miles per hour. Figure 10.9 Photograph of a bank slide that was triggered by a snowmobiler along the edge of the I Trail near Togwotee Pass on December 1. Figure 10.10 Photograph of the crown of a soft slab avalanche that buried a snowmobiler in a treed area on the south side of Two Ocean Mountain on December 2. Figure 10.11 Photograph of a rider who was buried in a slide on Two Ocean Mountain near Togwotee Pass on December 2. Figure 10.12 Photograph of the crown and the starting area of a very large slab avalanche that was intentionally triggered by a skier in the Chicken Scratch area of Mt. Glory on December 2. Figure 10.14 Locations of avalanche events that occurred in the area south of Teton Pass that includes, Thanksgiving Bowl, Avalanche Bowl and Christmas Tree Bowl. The orange color marker is in the starting zone of the avalanche that caught and partially buried a snowboarder on November 30. The black polygon delineates the extend of that event. Figure 10.15 Radial plot of start zone aspects and elevations of avalanche events that were observed this week in the backcountry near Teton Pass. Figure 10.16 Locations of avalanche events that occurred in the Togwotee Pass area during this week. Figure 10.17 Radial plot of avalanche start zone aspects and elevations of avalanche events that were observed this week in the backcountry near Togwotee Pass. Figure 10.18 Photograph of a slab avalanche that was triggered by a solo skier who was digging a snow pit in Steve Baugh Bowl outside of the boundary of the Grand Targhee Resort on December 5. That slide occurred late in the afternoon on a slope that had been previously skied.

Snow depths at 9,000 feet at the end of this week were 2 to 4 feet. The snow below an elevation of 8,000 feet is generally 1 to 2 feet deep. Warm temperatures in the latter portion of this week impacted the snow at the lower elevations. Figure 10.20 Map that displays the moisture content of the snowpack at Snotel sites in the Western United States on December 5 compared to the 30-year average. Most of those sites in Western Wyoming are close to average.