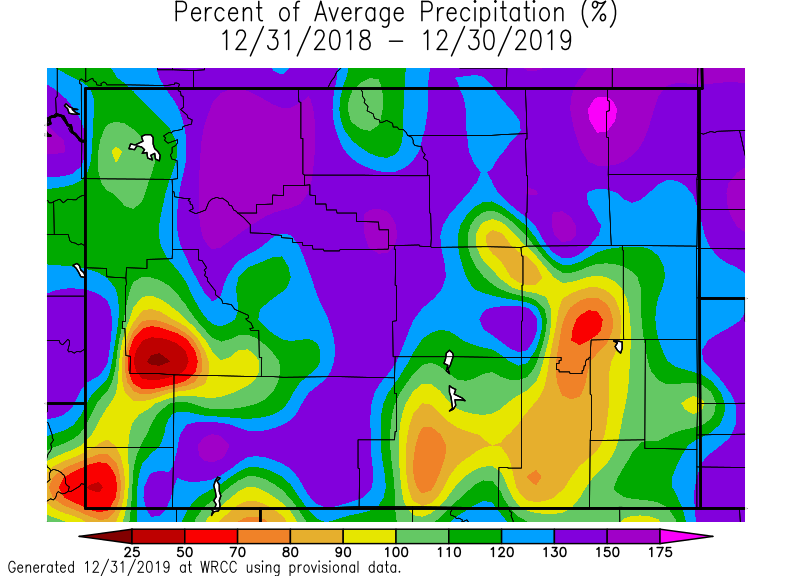 In a review of 2019 weather in Star Valley, the event that stands out is the extraordinary cold snap the end of October. Temperatures dipped to levels never recorded in October  as was blogged  http://blog.starvalleyweather.com/2019/11/01/october-coldest-on-record/

Even with a particularly dry summer,  precipitation and snowfall for 2019 was generally above normal. Following are the precipitation graphs for Afton and Bedford 3SE.

There are three Cocorahs observing locations  that have a history of several years recording both precipitation and snowfall.

Here is a a look at the 3 stations for the past 3 years. Units are in inches

The last day of snow cover was the 18th of April in Thayne, the 21st of April at Star Valley Ranch and not until May 4th at the Smoot 5 SSE station where the elevation is around 7000 feet.

While these amounts are near or a little above normal, by contrast on the lee(east) side of the Western Wyoming mountain ranges it typically is much drier.  This year an exceptionally dry location was at the Big Piney airport where total precipitation for 2019 was barely 2 inches. A dramatic example of the difference there is dependent on location of the upwind vs downwind of Wyoming mountains.

Temperatures with the exception of October 2019, were not of unusual  note.  Generally the first day of the year was one of the coldest with Double L Ranch dipping to -26 on January 1st. Afton was also coldest at -16 on the 1st.  Etna Elementary was coldest on the 2nd of January with Star Valley Ranch -10 on the same date.

The hottest day occurred on July 22nd when Etna Elementary topped out at 97.  Star Valley Ranch hit 92 on July 23rd.

A relatively new station located at one of the higher elevations of Star Valley Ranch, about 6600 feet MSL, had a yearly maximum of just 90 on July 22 and the coldest was only -7 on the 1st of January. Thus the extremes in temperatures occur along the valley floor, hotter in the summer and colder nights year round.

Many areas of Wyoming had near or above normal precipitation with the obvious exception of the very dry conditions near Big Piney.

Overall 2019 was not exceptionally above or below normal with the obvious exception of October.