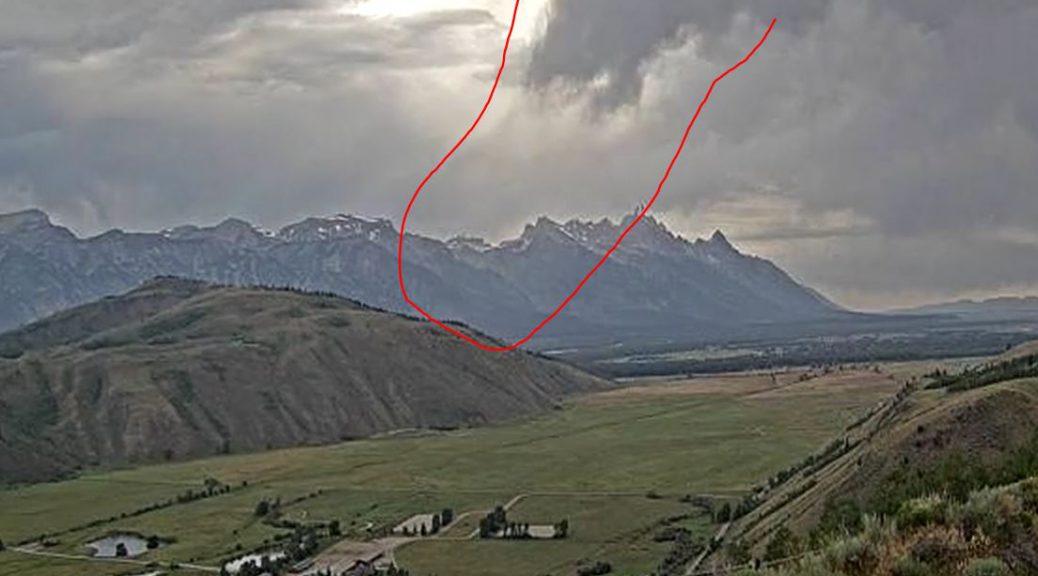 A serious incident involving the Hot Air Balloons  launched near Teton Village occurred around 8 am Monday morning August 3 2020.  From all indications a micro burst accompanying high based convection was the primary mechanism for the sudden winds that impacted the balloons.  While micro bursts are not uncommon during the summer given environmentally  favorable conditions, typically they occur after the ground has heated sufficiently to steepen the lapse rates and enhance the convective potential during the afternoon.  A concern for the occurrence of micro bursts at 8 am is unusual.  The following discussion and images will give some insight about this particular event.

The following is some live footage of the balloons as they were involved with the sudden winds with the micro burst.

There are several web cams that have views of the Tetons.  The Spring Creek cam is located about 6 miles southeast of Teton Village, with  intervening hills blocking the view of the ground where the balloons were likely located.

The cam video covers the period of the micro burst that impacted the balloons  which occurred shortly after 8 am mdt.

The following are individual frames from the video with an outline of the area of  potential micro burst occurrence.

While there was observed via cams and radar considerable mid/high level convection associated with a batch of moisture, most of the precipitation did not reach the surface as the low level air mass was quite dry and somewhat stable due to presence of strong overnight inversions..

The radar from Pocatello 88-D shows generally weak echo return moving across the area with a little stronger returns  further north  moving toward the higher Tetons. At the time and location of the Teton Village micro burst there were fairly weak echo returns.

Satellite animation shows the blob of mid/high clouds moving across western Wyoming with no indication of any strong convection/thunderstorms during the morning.

Also the upper level winds were generally 30 kt at 300 mb just west of the ridge axis.

However most significant were the very steep lapse rates just off the surface that the blob of  clouds was associated with supporting  the active mid and upper level convection.

The lapse rates above the surface inversions were nearly dry adiabatic 9.5C/km which certainly resulted in high based convection based generally near or above 500 mb or 7-10 thousand feet above the Teton Range and  more than 10,000 feet above the valley floor.  Most of the precipitation falling would quickly evaporate due to the dry sub cloud layer as noted in the sounding with classic micro burst potential.  However with the morning surface inversion in the valleys most of the micro bursts were likely dissipated before reaching the surface.

Thus surface wind gusts including  the nearby Jackson Airport were less than 10 mph.  There was an observation just  southwest of Teton Village at Buffalo at 7900 feet that reported gusts to 16 mph between 8 and 8:15 am mdt 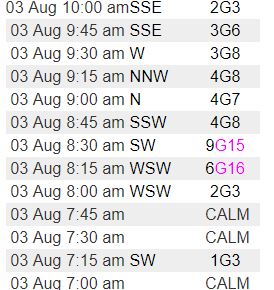 Further north near Teton  Saddle at  close to 12,000 feet nearly an hour later, gusts to 44 mph was recorded, likely comparable velocities an hour early on the valley floor near Teton Village.

In conclusion the conditions were favorable for dry micro bursts once the daytime heating could remove the overnight valley inversions and steepen the boundary layer lapse rates.  As noted on the examination of the Spring Creek cam a micro burst could be identified  where some of the virga precipitation may have actually briefly reached the surface and enhanced locally the winds down to the valley floor.