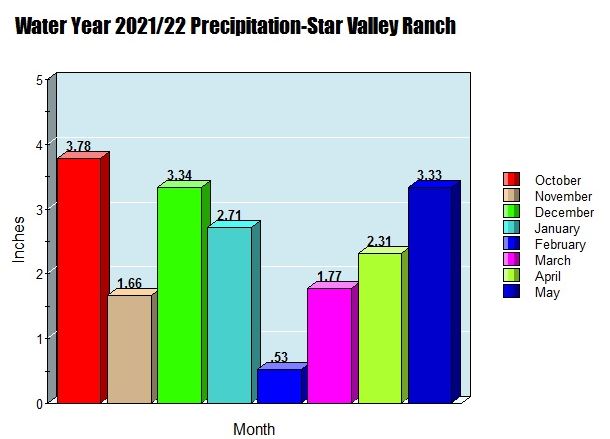 In the wake of a particularly long mid winter period of little snow, the storm track has been favorable for Star Valley/Western Wyoming the past 3 months.  A striking example is the fact that at Star Valley Ranch the total snowfall of 12 inches in the month of May  was 3 inches greater than usually one of the snowiest winter month of February!  Both March and April provided beneficial snow as well with all 3 Spring months substantially improving the mountain snow pack.  Coupled with the colder than normal Spring, the runoff has also been slower than normal.

Following is the monthly snow fall for the current water year at Star Valley Ranch. 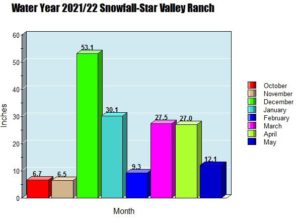 Of equal importance is the precipitation  at Star Valley Ranch so far in this water year, which begins on Oct 1st. 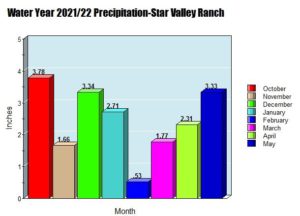 The dramatic improvement in the snow pack in nearby mountains is observed from the Willow Creek SNOTEL site in the Salt River Range.

The serious snow drought that began after New Year extending through February had put the snowpack at much below normal levels and even behind last year.  That all began to change in March and by the end of April a dramatic improvement had occurred with the snow pack above normal.  The cool and wet May has maintained a substantial snow pack right up to the end of the month.  Last year by the first of June the snow melt had basically completed.

This puts Star Valley in excellent position for water going into summer.  Recall that June of 2021 was historically dry with no measurable precipitation observed at Star Valley Ranch.

Even with the beneficial Spring snows, the seasonal snowfall totals at Star Valley Ranch are still the lowest in the past 6 years. 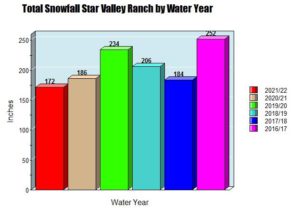 But with the wet period of last Fall and the last couple of months actual total precipitation for Lincoln County/Star Valley  is running near to above normal since October 1 2021..  This is in contrast to the much drier conditions south and west across Utah  to California. 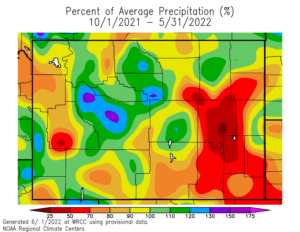