This story courtesy of 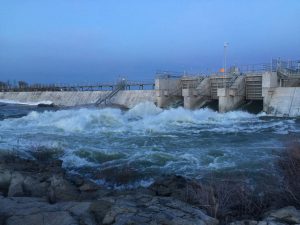 Minidoka spillway near Rupert during high flows of 2017.| U.S. Bureau of Reclamation.

IDAHO FALLS — Water levels at area reservoirs are unseasonably high right now, which makes water experts and farmers quite pleased. But some residents are wondering if there is the possibility of flooding on the horizon.

However, water officials assured EastIdahoNews.com they are constantly monitoring area reservoirs so they can attempt to achieve the balance of having plenty of water for residents and farmers, while also making sure reservoirs don’t overflow.

To get an idea of where the water situation is now, and where things usually are this time of year, here are the average numbers from Idaho Water District 1: 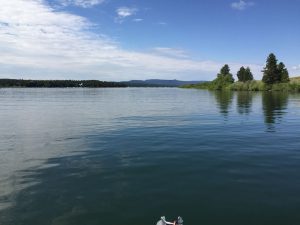 Area reservoirs, like the Island Park Reservoir pictured here, are unseasonably full for this time of year. | Courtesy U.S. Bureau of Reclamation.
Lyle Swank, water master for Idaho Water District 1, said the high levels are a direct result of the big snow pack last winter. Last year, the large snowpack resulted in significant flooding during the spring months. Whether reservoirs continue to fill up this year will depend on how much snow falls this winter.

In the spring when the runoff starts, water officials will decide if groundwater recharge is a possibility. Recharge is a term used to describe when water from surface water sources is routed to the groundwater or aquifer. During drought years, the Snake River Plain Aquifer losses a significant amount of water, and so recharge efforts are always important. It’s also a good way to get rid of excess water in reservoirs.

“There is still a lot of time between now and run-off,” Swank said. “We can evaluate then whether we need to run water out.”

If at some point there happens to be a big rain event, there are measures they can take to make sure reservoirs stay high, but flooding doesn’t occur.

“Reservoirs are designed to be able to release inflow or rain up to a maximum probable flood,” Swank said. “It is all based on the hydrology of the watershed of the reservoir. Rather than pumping water out, the discharge outlet gates and the emergency spillway would be used if there was an unusual or extreme rainfall event.”

Ryan Newman, manager of the Bureau of Reclamation’s Upper Snake River Field Office in Hagerman, is thankful to see the reservoirs as full as they are.

“It’s been a water rich year,” he said. “At the end of the irrigation season our water levels are above average. It’s a good place to be.”

He added that their number one goal is to have full reservoirs, but not at the expense of flooding.

“We look at it in real time and take it seriously,” Newman said. “Folks can count on flows going up this winter. It’s just a matter of how much and when. But it could be a dry winter and we wouldn’t want to let any water out if we don’t have to.” 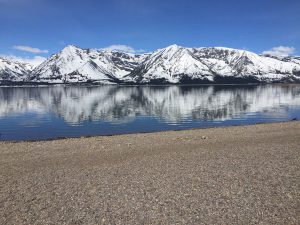